Covering, community and creating space for one another: A Pride conversation 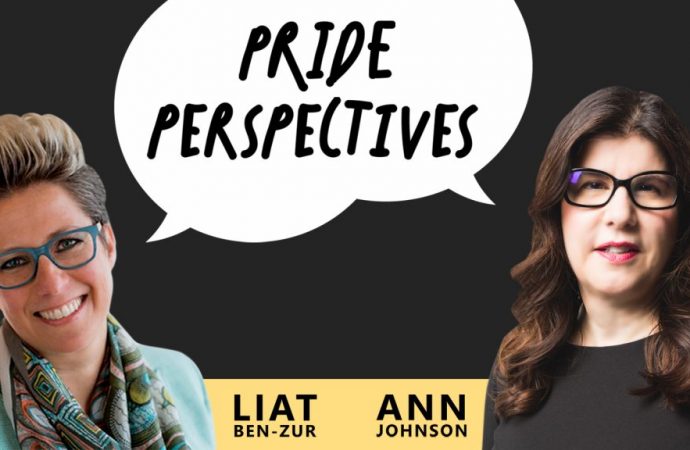 Editor’s note: In acknowledgment and celebration of Pride, Microsoft executive co-sponsors of Global LGBTQI+ Employees and Allies at Microsoft Employee Resource Group (GLEAM) Ann Johnson and Liat Ben-Zur got together (virtually) for a personal conversation about leadership, allyship, intersectional identities, bias and the powerful advocacy work of communities across the company. This is an edited…

Editor’s note: In acknowledgment and celebration of Pride, Microsoft executive co-sponsors of Global LGBTQI+ Employees and Allies at Microsoft Employee Resource Group (GLEAM) Ann Johnson and Liat Ben-Zur got together (virtually) for a personal conversation about leadership, allyship, intersectional identities, bias and the powerful advocacy work of communities across the company. This is an edited version of their chat.

Liat: Ann, would you share some insights about your personal and professional path and how that connects both to what we do in GLEAM, and to how you approach your role leading teams at Microsoft?

Ann: First, it’s so great to be having this talk. You know, a lot of times earlier in my career, I was the only woman in the room. I also noticed that often, everyone in the room was white. As my career evolved, I started really becoming aware that there was a ceiling that not only I, but other people were hitting. I felt I had a certain amount of advantage because I have a college education and I am a white woman, and I can pass for having a very traditional, as it was called back then, lifestyle. I knew as I was starting to elevate in roles that I had a responsibility to create space for people. I had a responsibility to put the ladder back down behind me, even in my early management roles, to make sure other people can climb that ladder.

I figured out that if I could bring diverse perspectives and experiences into the conversation, we would get better outcomes. We had people coming from different backgrounds, people who maybe didn’t have a college education or maybe didn’t have a STEM (science, technology, engineering and math) education. Or maybe they were a woman with a wife and children at home. I wanted people to feel comfortable having those conversations with me, so that has really informed my entire career in tech because I I’ve tried to create space. I’ve made mistakes. I grew up Mormon in a very small town in a very conservative place. I was on a huge learning curve, but I feel like that I had a responsibility to be on that learning curve.

Let me ask you a similar question about your story and how your various intersectional identities have influenced your path personally?

Liat: In many ways it’s very similar to some of your experiences. My journey in tech started over 25 years ago. I was a young female engineer, and especially in the semiconductor and wireless space I learned early what it means to be an outsider. I was almost always the only female in the room, the only female leader. I felt I had to prove myself, always had to do a little bit more to earn the trust and respect of my colleagues.

After doing that for so long just trying to fit in, I started to realize just how much I was holding back. For most of my career I was covering. And I didn’t really think that much about it because I just thought, you know, that’s what you had to do. I worked so incredibly hard to earn credibility with my colleagues that anything that would further marginalize me I was of afraid of.

It’s only after I came out, late in my career, that I realized how much weight I was carrying on my shoulders all those years. All those years of pretending to be someone else, of watching what I say, watching my pronouns, always on my toes when personal questions were being asked. It had a big mental, emotional and social impact on how I relate, how I don’t relate, even to this day. And I think the power of finally lifting that veil, being able to be my full, true authentic self at work — the release, the freedom, just enabling me to be me — really had a massive impact. It allowed me to be a better engineer, a better boss, a better mom, a better wife. Now that I’m a leader, it’s important for me to help create work environments that are welcoming, safe and supportive for everyone.

The cybersecurity industry has long acknowledged that with artificial intelligence and machine learning, the greater diversity of data that we have there, the better the outcome. I’m curious, Ann, how you think about diversity and inclusion, both from the business and the culture perspective?

Ann: You go where you’re invited and stay where you are welcome, meaning it’s not enough to bring people in. We have to actually create an environment where they stay and they’ll be successful. Diversity and inclusion are not just about race, and not just about gender identity. They’re about educational background. They’re about socioeconomic background. They’re about our many dimensions of identity. We need as many liberal arts graduates as we need STEM graduates. I compare it to machine learning. If you have millions of signals that are all the same thing, you don’t learn anything. You have to have diversity of data, so I put the diversity of thought of human beings to solve our problems in the same bucket. And as much work as we have done here at Microsoft toward this, we still have a way to go in creating a space where everyone feels safe to bring their authentic self to work.

Liat: We do. And I think the onus is on us, and thanks to leaders like you and so many others to model that change day by day.

Ann: One thing is we have to make sure that we address unconscious bias whenever we can. We make sure that not only do we have diverse candidates being interviewed, but we have diverse interviewers. And then as we get that interview feedback we look at it and say, was there any unconscious bias? By the way, everyone, including me, has unconscious biases. I know you will appreciate this: I interviewed someone not that long ago who was encouraged by a mentor to change their hairstyle for the interviews, to “look a little more professional.” That’s the kind of coaching people are still getting.

Liat: I got that, you know. I’ve received that feedback once or twice, especially when I was an executive in Europe.

You’re this amazing leader by the way, I look up to you, you may not realize that — because you are your authentic self. I know you celebrate that uniqueness. Can you tell me what parts of your journey have most influenced you to be the person you are today?

Liat: I haven’t always been my authentic self, and I think because of that, I do try to create that space not just for myself but for others here at Microsoft. I’ve learned that celebrating the different voices at work actually leads to diverse perspectives. I think we can only build products as inclusive as the teams who are building them. So as the leader of our consumer services here at Microsoft, I’m always thinking about how we can make better solutions for individuals, for families around the world and the problems that you and I experienced. The unmet needs vary widely based on our lived experiences. So, one product that works fantastically for one person can actually cause a lot of stress or anxiety for someone who has disabilities. One product with a design aesthetic that I love can be completely hard to see or impossible to read for someone else. Designing solutions that adjust for individual needs requires product makers who look at things differently.

I’ll give you an example. Designing a product that can help kids feel safer or be safer when they’re online and when they’re offline, which really was designed perhaps to make parents feel safer with their children in today’s world, could actually prove to be extremely helpful in protecting transgender youth getting home safely at night, in a totally different context with a totally different use case in mind, that might require a slightly different user experience.. It’s only with the diversity of the teams that we build that we can explore our world, our users, our products, our needs with all of these different perspectives.

Ann: As an LGBTQI+ person, how do you think about allyship?

Liat: There’s a lot for us to lock arms and push against, and I’m really proud to be part of a GLEAM community that wants to do that.

Our Gleam Employee Resource Group has been so fortunate to have your executive support and leadership, Ann. We have a lot to celebrate. But there’s also a lot of work that needs to be done. What stands out to you from this past year and where would you like to see us go next?

Ann: I think it’s important, especially in the workplace context, to continue to educate people on how to be good allies. We talk about how there’s no allyship without action. So how do you do that. I give one example to my team – if we’re on a Teams call and someone’s just not getting their voice heard, speak out: “Liat, did you want to add to the conversation?” And advocate for the people when they’re not in the room: “Hey, I think Liat is super talented. This project would be really good for her.”

And I think being a great ally is always holding yourself accountable, making sure that your actions aren’t harming somebody unintentionally. I do think in general people have the best intent. They don’t always know how to act on that best intent.

Liat: I think that is a great goal for all of us to work on. Thank you so much for this chat, Ann.

Your email address will not be published. Required fields are marked with *