Inspiring students to build a more peaceful world with Minecraft 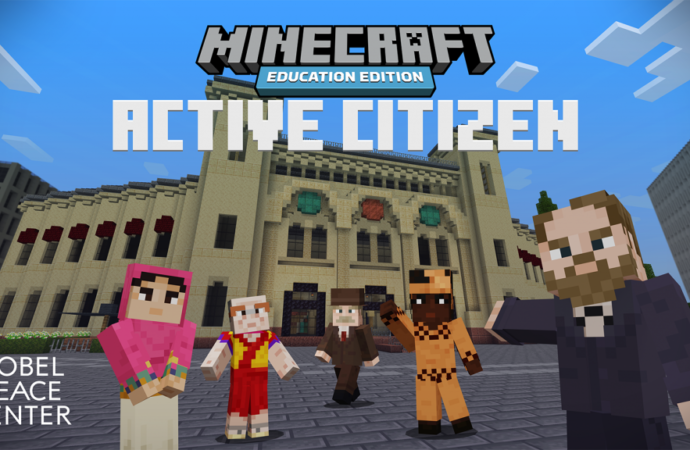 Every day, millions of young people in every country and territory around the world use Minecraft as a platform to connect, solve problems together and explore their creativity in all sorts of ways.  Players can truly build whatever they imagine in Minecraft, and now, this extends to their visions for world peace. Today we are…

Every day, millions of young people in every country and territory around the world use Minecraft as a platform to connect, solve problems together and explore their creativity in all sorts of ways.  Players can truly build whatever they imagine in Minecraft, and now, this extends to their visions for world peace.

Today we are honored to launch an immersive Minecraft learning experience at the Nobel Peace Center in Oslo, Norway. The “Active Citizen” project educates young people about Nobel Peace Prize laureates past and present and fosters an understanding of the skills needed to drive positive change in the world. “Active Citizen” is now available for millions of learners around the world in Minecraft: Education Edition, a special version of Minecraft designed for use in educational settings. The game includes accompanying resources on the web for classroom use, including lesson plans and teacher discussion guides designed for students aged 8-16.

“Active Citizen” was released in a global broadcast video Tuesday, with a second broadcast airing at 10:00 am PST. The Nobel Peace Center in Oslo hosted a live launch event, as Norway’s Minister of Education Tonje Brenna and Odin Adelsten Bohmann from the Department of Culture met with local students from Kampen School. They discussed what it means to be an active citizen and play the game for the first time with members of our Minecraft Education and Microsoft Norway teams. Dignitaries from around the world including His Holiness the 14th Dalai Lama, Wanjira Mathai, Chairperson of the Wangari Maathai Foundation, and Vidar Helgesen, Executive Director of the Nobel Foundation, have supported and participated in this groundbreaking project.

When players enter the “Active Citizen” Minecraft world, they are transported to the Nobel Peace Center in Oslo, where they meet Alfred Nobel, who left most of his fortune to establish the Nobel Prize. ​Players then meet four Nobel Peace Prize laureates – Malala Yousafzai, Wangari Maathai, Fridtjof Nansen and the 14th Dalai Lama – to learn about their stories and help them overcome challenges as they build peace in their local communities. The game experience concludes by calling on players to identify a local cause meaningful to them and create a unique Minecraft build that represents their vision of peace. The Nobel Peace Center will curate a museum exhibition of “Active Citizen” designs featuring contributions from players all over the world.

At Mojang Studios, we are committed to building a better world through the power of play and inspiring young people to make a positive impact in their local communities. We hope that by inviting young people to meet Nobel Peace Prize laureates, learn about their lives and visit their homelands in a familiar Minecraft world, they will be inspired to take action to make the world a more peaceful place for all. We are honored to partner with the Nobel Peace Center and Games for Change to inspire action through game-based learning.

The “Active Citizen” game and accompanying lesson plans are available for all users of Minecraft: Education Edition both in-game and on the Minecraft website. A free demo of “Active Citizen” will be available later this month. Further learning materials can be found on the Nobel Peace Center education portal.

Your email address will not be published. Required fields are marked with *

We use cookies on our website to give you the most relevant experience by remembering your preferences and repeat visits. By clicking “Accept All”, you consent to the use of ALL the cookies. However, you may visit "Cookie Settings" to provide a controlled consent.
Cookie SettingsAccept All
Manage consent

This website uses cookies to improve your experience while you navigate through the website. Out of these, the cookies that are categorized as necessary are stored on your browser as they are essential for the working of basic functionalities of the website. We also use third-party cookies that help us analyze and understand how you use this website. These cookies will be stored in your browser only with your consent. You also have the option to opt-out of these cookies. But opting out of some of these cookies may affect your browsing experience.
Necessary Always Enabled
Necessary cookies are absolutely essential for the website to function properly. These cookies ensure basic functionalities and security features of the website, anonymously.
Functional
Functional cookies help to perform certain functionalities like sharing the content of the website on social media platforms, collect feedbacks, and other third-party features.
Performance
Performance cookies are used to understand and analyze the key performance indexes of the website which helps in delivering a better user experience for the visitors.
Analytics
Analytical cookies are used to understand how visitors interact with the website. These cookies help provide information on metrics the number of visitors, bounce rate, traffic source, etc.
Advertisement
Advertisement cookies are used to provide visitors with relevant ads and marketing campaigns. These cookies track visitors across websites and collect information to provide customized ads.
Others
Other uncategorized cookies are those that are being analyzed and have not been classified into a category as yet.
SAVE & ACCEPT